A scenario is a what-if model. It allows you to explore and calculate different future situations (scenarios) without changing values in the worksheet.

You might want to compare best-case and worst-case scenarios for the annual profit of a coffee shop, based on different costs. The result cell is the cell with the calculated profit. The changing cells are the cells with the costs.

Identifying the changing cells and result cells is key for creating scenarios.

With Excel’s scenario manager, you can create different sets of input data that calculate the corresponding results. You can save such a scenario under an appropriate name (such as Most Positive, Most Negative, …). You can easily compare the different results in a produced summary report. This report shows both the input values for the changing cells and the values of the result cells.

It is recommended to always save the current situation in a scenario, for example under the name Current.

In figure 11.1, you see a calculation model of a coffee bar. The gray cells are the variable cells. 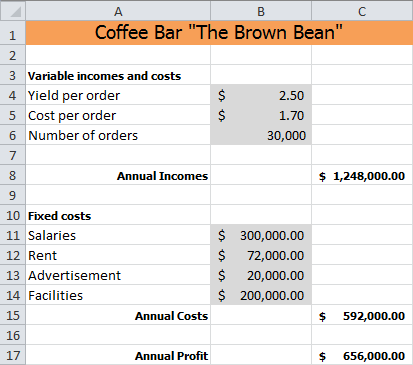 In addition to the current situation, the owner of the coffee bar wants to explore two other scenarios to see the effect on the profit.

Study the model. Identify the changing cells and the result cell. Study the used formulas and see that all cells have names.

If you give meaningful names to the cells then these names will be used in the summary report instead of the addresses. Then it will be easy to read the report. 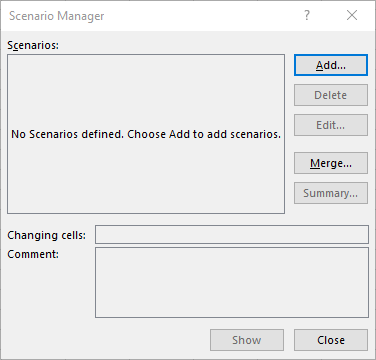 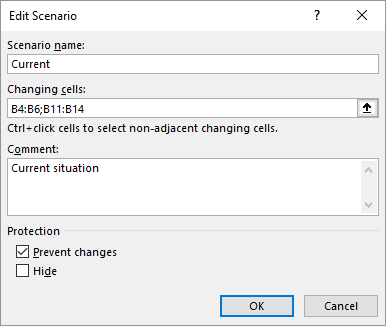 Figure 11.3: Dialog box to record the current situation in a scenario. 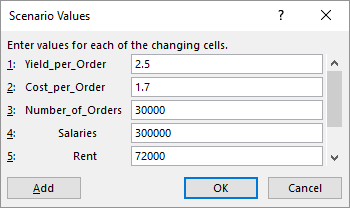 Figure 11.4: Dialog box with the values of the changing cells for scenario Current.

When you have used formulas, a warning screen appears that the entered formulas will be replaced by the results of the formulas.

After the last scenario has been added, you will return to the Scenario Manager dialog which now contains three scenarios (figure 11.5) 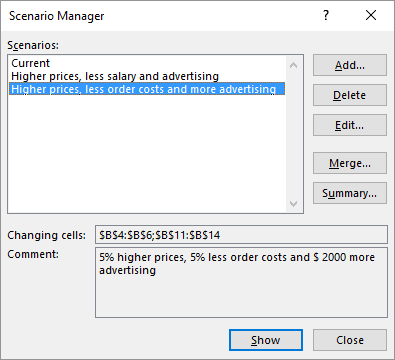 In the worksheet, the values in the changing cells and the cells that depend on them are adjusted for the selected scenario.

A dialog box will appear (figure @ref(fig:coffee bar-scene-reporttype)) in which you can choose the type of summary. Also the result cell (the cell with the profit) has already been filled in by Excel.

A summary report will now appear in a new worksheet. Note that the left column contains the assigned cell names and not the addresses, making the report easier to read. 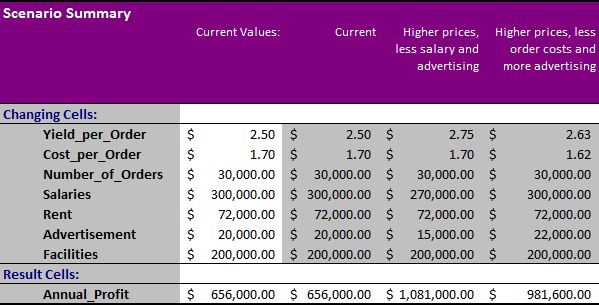 Create the following table as accurate as possible. Use formulas for the determination of the margin, VAT, and the selling prices.

Use the Scenario Manager to determine the selling prices (incl. VAT) for successively the profit margin rates of 15%, 20%, 25%, and 30%. The output should look like the following:

In the following figure, you see a simplified budget of a sports club. The rent is exactly known. For the other posts, a reasonable indication of the lower and upper limits can be given.

Enter the model in a worksheet. Create with the Scenario Manager the most positive and most negative scenario. The output should look like the following:

A company makes three products (A, B en C). To manufacture each product a different number of working hours and materials is needed. In the following figure, you see the rates for labor and material costs as well as the quantities needed to make these products. Also, the costs and revenues are calculated for the current production quantities.

Enter the model in a worksheet. Provide the right formulas in the cells in which values have to be calculated.

Management wants a prediction of the operating profit, but there is still some uncertainty about the amount of labor and material costs. For the prediction are therefore three scenarios available: the favorable case, the bad case, and the current (most likely) case. The different rates are listed in the following table.

Create a summary report for these three scenarios using the Scenario Manager.

Create this model in a worksheet. The revenues and expenditures for 2010 are fixed and these should be calculated for 2011 and 2012. Provide the right formulas in the cells whose values have to be calculated.

Management wants a prediction of the profit forecast, but there is still some uncertainty about the development of some factors that affect the profit. The central planning bureau has released predictions of these factors. Based on these predictions three scenario’s are computed:

Create a summary report for these three scenarios using the Scenario Manager.