You can automate a task that you have to perform regularly in Microsoft Excel with a macro. A macro consists of a series of commands and functions that are executed in succession by a single command or the press of a button.

A macro is therefore primarily intended to be used for frequently occurring actions or for complex actions. By using a macro, efficiency can be increased and the chance of errors can be reduced.

Simple macros consisting of a number of actions performed in succession can be recorded with the built-in macro recorder. Complex macros are programmed in the VBA programming language. Only simple macros are discussed here, you do not need any programming knowledge for this.

The language in which the Excel macros are written is Visual Basic for Applications (VBA). The commands and functions of the macro are stored in a Visual Basic module. And with the Visual Basic editor, you can edit macros, copy macros from one module to another, copy macros between different workbooks, and rename modules and macros.

o be able to record, edit and execute macros, the tab Developers must be made visible.

A number of Excel functions, including those for Macros and VBA, are located under the Developers tab. This tab is not shown by default when Excel is installed and will therefore have to be made visible first. This is a one-time action.

First check whether the tab Developers is present on the ribbon. If so, you can skip this task.

The tab Developers should now be visible on the ribbon (see figure 16.1).

Simple macros can be created by recording the operations with the built-in macro recorder. After starting the recorder, all actions are recorded and converted into VBA code in the background. This continues until the recorder is stopped.

In order to get a properly working macro, it is important to first perform the actions to be performed without recording and write them down in order. You can then use this script to record the actions with the macro recorder.

The button with which you can start recording macros is on the Tab Developers in the group Code, see figure 16.1.

When this button is clicked to start recording a macro, a dialog box first appears in which a number of properties of the macro can be entered. 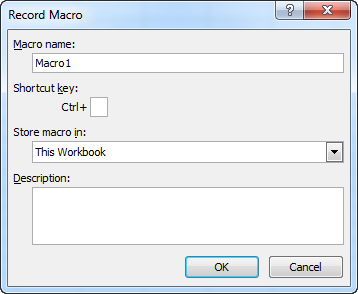 Each macro must have a name. To do this, Excel fills in the default text “Macro” followed by a digit. You can change this name by typing a different name.

The first character of the macro name has to be a letter. After that, you can use other characters such as letters, numbers, or underscore. Spaces are not allowed in a macro name. Always give meaningful names showing what the macro is going to do. The underscore can be used as a separator between words.

Macros can be executed through the menu, but this can also be done using keyboard shortcuts. These are shortcuts with the CTRL key combined with a letter key. If you want to assign a keyboard shortcut to the macro then you can enter the letter in the box. Putting for example the letter A in the box, then the key combination CTRL-A is the shortcut that allows you to start the macro.

It is not required to assign a keyboard shortcut to a macro, but this can be very useful for frequently used macros.

The locations where the macro can be stored are:

It is important to think thoroughly about it. If the macro is to be used only in the active workbook, choose This Workbook. Should the macro be used in other workbooks, so it is always available, then the Personal Macro Workbook is the best choice. The option New workbook is actually never used.

You should always specify the storage place. The default value is This Workbook.

It is recommended that you give a brief description of what the macro does. When you create the macro you know it, but after a while, you may forget. It is not mandatory to specify a description.

All made choices can always be changed at a later stage.

Create a macro that should format the text in the selected cell with the font Comic Sans MS, bold, italic, 16 pt, and red. The column width must be adjusted to the width of the text in the cell. The name of the macro should be CellFormat. 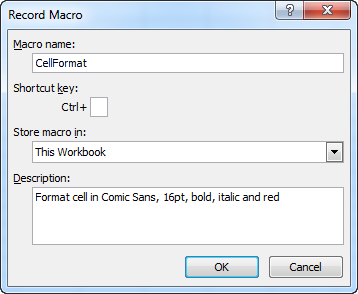 Now the macro can be tested for a correct operation. 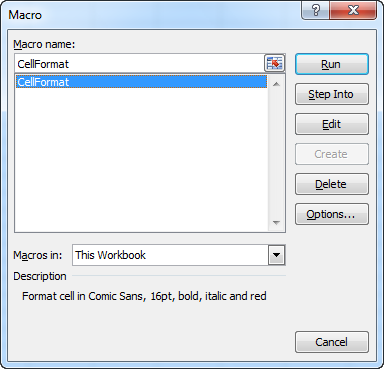 To perform this task, it is necessary that the macro CellFormat in 16.3 is created.

A macro can be changed without recording the macro again. Both the options of the macro as the program code can be viewed and modified.

Make the following changes to the CellFormat macro:

You now get the dialog box with available macros again, see figure 16.6 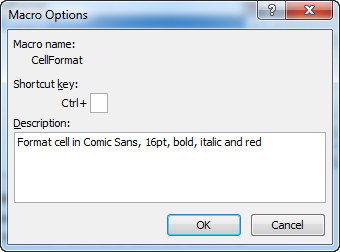 A new Microsoft Visual Basic window will now appear with the program code of the macro in the code screen. In this code you will find 16 for the text size on two places:

You can run a macro in one of the following ways:

This task creates a command button on the worksheet for the previously created macro Cell Format.

Figure 16.8: Form controls, the highlighted one is Button (form control).

The cursor will change to a +. With this cursor, you can draw a rectangle in the worksheet for the button. 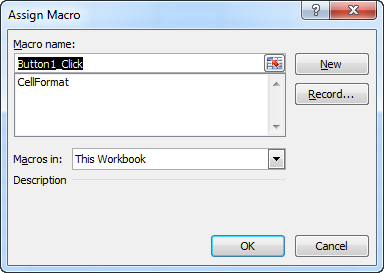 The drawn rectangle will turn into a button with a text like Button 1.

An overview of the security settings and how to change it.

If you want to view or change the security settings for macros, then you need to click on Developer tab > Macro Security (group Code). 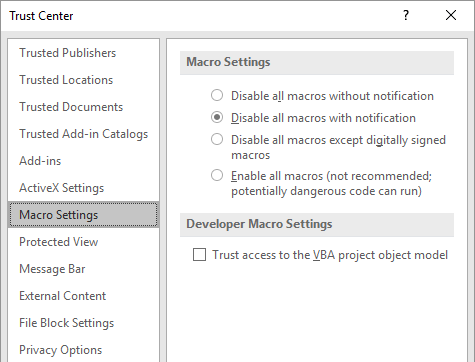 Recorded macros will use absolute cell references by default. This means that the exact locations of cells, rows, and columns in the program code of the macro will be used. The macro works then always at the same addresses.

When you want to use relative references in the macro you need to click on the button Use Relative References.

This setting remains active until you undo the setting by clicking on this button again.

Record a macro that gives the active cell a gray background color.

Record a macro with the name PercentageFormat that is formatting a numeric value as a percentage with 1 decimal and also centers the content in the cell.

Record a macro that performs the following:

Create a macro that ensures that the grid lines will be printed at printing.

You can find this property at the tab Page Layout > Page Setup > tab Sheet.